I read Meghan Ward’s excellent Writerland blog post, Does Social Media Sell Books?, this morning, and thought I would share a version of my comments here:

I recently came across two terms that relate to me as a self-published and self-marketed author:

“Googlable“: I have a blog that comes up on top of the first page of search results with my my name as the search string, so I guess that makes me “googlable”.

“Long Tail Business Model“: Illustrated in the graph below, Lulu.com founder Bob Young verbalized this business model in a 2007 interview: 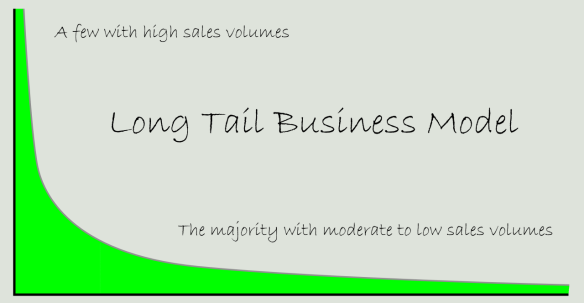 I guess I could have also titled this post “Are Self-Published Authors Skewed?”

On the topic of using social media to market books, I currently have about 20 folks who follow my blog, about 40 likes on my Facebook page, and a little over 300 followers on Twitter. Pretty meager numbers compared to many, but darn, it has taken an inordinate amount of time away from writing my next novel just to get to these levels. Going by gut feel, I can’t relate many–if any–book sales to my social media efforts. Maybe I’m doing it wrong. I adopted the “social media is about being social” mantra, and I hardly ever even mention my novel, let alone hawk it, although everything does link back to this blog.

While I sit with the vast majority, somewhere in the “long tail” of self-published authors, I’ve met some lovely folks through my social media socializing, and I’m enjoying posting weekly on my blog. Now it’s time to dive deeply into my next novel (think James Herriot meets Nora Roberts in Ireland!), because it’s the crafting of stories that I really enjoy. 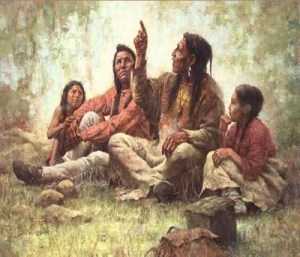 This is great news on a number of levels:

I think the biggest revelation with this announcement is the indication that The Big Six are coming around to a self-publishing trend that is popular with both authors and readers. You and I already know it’s a trend that’s here to stay!

Here are links to the Penguin Group USA’s announcement and a related article in today’s Wall Street Journal: